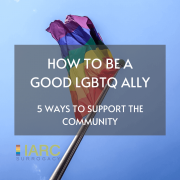 Despite the immense progress that has been made in recent years towards equal rights for LGBTQ people, the community is still hugely affected by hate crimes, discrimination, and harmful biases. In order to achieve equal rights and fair treatment, the LGBTQ community still needs allies to support them.

Allyship is an ongoing commitment that protects members of the LGBTQ community from harm and affirms their agency. Here’s how to be an LGBTQ ally in five easy steps.

How to Be a Good Ally

Allyship is a critical aspect of developing a safe, inclusive society for members of the LGBTQ community. Contrary to popular belief, learning how to be a good ally is not as simple as voicing your support for these individuals.

Instead, there are many ways to be an ally. No matter how you approach it, at the core, meaningful allyship is marked by conscious leadership and genuine action that benefits the necessary safety and social accountability that keeps LGBTQ people secure and supports their agency.

IARC Surrogacy is proud to help support LGBTQ families. We’ve facilitated over 2,000 births for parents in over 24 countries, and the vast majority of them have been gay couples. Learn more about what surrogacy is and how it works. Then consider partnering with IARC to help a gay family grow.

What is a Straight Ally?

The meaning of a straight ally refers to someone who identifies as heterosexual, as well as the gender they were assigned at birth.

Typically, many straight people are also considered “cis,” which is short for cisgender. This term means essentially the same thing: The individual maintains their birth-given gender.

People in this demographic need to support marginalized or disenfranchised members of the LGBTQ community outwardly.

Since cis people do not face the same discriminatory – and, often, outright hateful – treatment that LGBTQ folks do, they typically have more social influence and agency to advocate on behalf of those who have been alienated and denied fundamental civil rights.

5 Tips For Being an Ally to the LGBTQ Community

Much of the discrimination that LGBTQ folks experience is rooted in outdated ideologies that uphold stereotypes and harmful rhetoric.

A good ally to LGBTQ people helps correct destructive stereotypes and pushes back on old ways of thinking. Respecting personal boundaries and using inclusive, empathetic language (e.g., saying “sexual orientation” instead of “lifestyle” or “choice”) is a great way to start challenging those stereotypes.

The importance of surrogacy in the LGBTQ community cannot be overemphasized. Ensuring equal rights among cisgender people, queer people, and gender non-conformists allows everyone to experience the joy of having a family.

A 2017 survey revealed that most gay fathers prefer surrogacy because they see adoption as a less accessible option for parenthood. However, in recent years, waiting lists for intended parents to be matched with surrogates have gotten longer and longer.

Demand for surrogates far outweighs the supply, which means many gay couples have to wait a year or more to even begin the process. Support through surrogacy could help make an LGBTQ couple’s dream come true.

Learn About the LGBTQ Community (and Teach Others!)

The only way to learn how to be a better ally is to arm yourself with knowledge. Consider the stats shared earlier. As an LGBTQ ally, this information provides you with the necessary motivation and contextual social understanding needed to treat others fairly and sensitively.

Inclusivity is not merely the practice of welcoming LGBTQ people into your business or home. Instead, it is the deliberate evolution of your ways of thinking and behaving to ensure that your neighbors, colleagues, and friends have the same rights and privileges as you do.

Some ways to practice inclusivity include finding teachable moments to stop peers’ harmful behavior and respecting one another’s preferred pronouns.

Letting hateful comments slide reinforces the idea that such behavior is acceptable. It is not.

Never tolerate such behavior from anyone, whether it be in the workplace, school, or at home. Be the voice that leads to change.

Note that “hate” doesn’t only emerge in social spheres. Discrimination against this community is embedded within US politics and even our medical system. For example, access to and insurance coverage for the assisted reproductive medical technologies is often gender and sexual-orientation-based in a way that discriminates against the LGBTQ community. Fighting for inclusive legislation and insurance options is central to advocating for equal rights.

Why You Should Be an LGBTQ Ally

LGBTQ allyship is possible for anyone, no matter who you are or where you’re from. Yet, to excel in your advocacy and ensure authenticity in your actions, you need to know why you’re an ally.

Here are some of the most critical reasons why the LGBTQ community needs you to learn how to be a good straight ally:

These are only a few of the most vital reasons for participating in LGBTQ allyship. As we’ve discussed, there are many ways to go about being an advocate.

Help Grow LGBTQ Families by Becoming a Surrogate With IARC

Learning how to be a good LGBTQ ally is critical to developing a safe, inclusive society that is welcoming to all. Whether you choose to be an advocate in the workplace or as a surrogate for same-sex couples, educate yourself and transform your perspective to support those who do not conform to gender barriers.

At IARC Surrogacy, it is our mission to ensure that people of all genders and sexual orientations have equal opportunities to start a family. Do you meet the requirements to be a surrogate? Help those in the LGBTQ community who would like to have children make that dream come true by becoming a surrogate today.